Just as the Feast of the Holy Family ended, the presence in town of some friends from Europe who managed to find me, gave me an opportunity for three days to play tourist and finally to push out to new (and exciting) frontiers in Hong Kong and its surrounding area.

The first adventure was the start of multiple trips across Victoria Harbor using the historic and adventurous “Star Ferry” first operated in 1880 to cross form Hong Kong island to Kowloon. In nearly every guide book about Hong Kong, this ferry is mentioned on the “must see” list, and it is a much nicer and more exciting trip to cross the harbor by ferry than to cross it by subway passing deep under the harbor.

Boarding the ferry at Central from Pier 8, you go through an old turn-style (think of NYC subways of a half-century ago), once the ferry disgorges passengers from the previous crossing, the gates open, and men, women and children, young and old, many carrying enormous and heavy baggage, run down the pier to the rickety gangplank across the edge to the lower deck (the best one for taking photos, despite the noise and fumes from the diesel engines in the center of the deck).

You pull away for the 12-minute or so ride, marveling at the sight of Hong Kong with the iconic skyscrapers that mark its profile: HSBC, Bank of China, Jardine House (with the memorable round windows on every floor), the soaring towers of One and Two International Finance Centre, and countless others. If you time the trip right, at 8:00 p.m. the lights on all the buildings on both side of the harbor burst with imagery, dancing lights, and whimsy that reflects off the waters of the harbor. For Christmas, it was especially entertaining with so many Christmas lights and designs added to what is already quite a show.

Arriving on the opposite side you are in Tsim Sha Tsui (or TST) the entry way for Kowloon.

Hong Kong already is overcrowded with its population numbering some 7.24 million inhabitants with the median age being 45-54 for both men and women (but women being 53.8% of the population). Add to this dense population the crowds of ex-pats and tourists who arrived for the Christmas-New Year’s holidays and you can begin to imagine the density of crowds at every step of our 3-day “exposure tour” of Hong Kong.

It took us over 25 minutes just to break free of the crush of crowds arriving at Ocean Terminal (a shopoholic’s idea of heaven, nearly a half-mile of 2- or 3-levels of covered top line shops and boutiques).

We finally broke free onto Canton Road and headed north trying to find someplace to eat, and discovered a hidden alleyway that one gets to by walking up a flight of steps into a building, going through the upper floor and out into this alley that had over 40 restaurants on 3 floors on each side: Chinese, Japanese, Korean, Thai, Indian, Malaysian, Nepali, Indonesian, Italian, German, Irish pub, Spanish, Portuguese, and eclectic fusions of any of the above.

We were waved into one place that was brightly lit with fluorescent lights and people sitting on small stools around tiny tables. Walking in, we realized we were the only non-Chinese, but no one seemed to notice. Soon a small table in the back near the kitchen was cleaned off, wiped down, and a set of chopsticks and tea cups were laid out and we sat to a very enjoyable Cantonese dinner of fish, rice, chicken, pork and bok choy and two full tea pots of green tea.  The dinner cost less than $10.

Fortified by this wonderful meal we made our way back to the ferry pier and were able to get great shots of the other side, with the lights glistening off the water.

The following day, with better weather on our side, we made the trek up to The Peak (Victoria Peak), taking the tourist “Peak Tram” up the side of this 552 meter mountaintop, that rises almost vertically up the mountain attached to a steel pulley of sorts — a harrowing ride as you pass 40- and 50-storey buildings on each side.

Although it was a gray overcast day, the views from the top made the 40 minute wait on line worthwhile. But, not wanting to wait another 40 minutes to get back down from the mountaintop, I found a taxi stand and we drove back.

We made a circuitous route back on the bottom to the western edge of SoHo (Mid-Levels) to another tourist site, the Man Mo Temple, nestled into a small area on Hollywood Road. This is a Taoist shrine dedicated to the gods of literature (Man) and war (Mo), built in1847 during the Qing dynasty by wealthy Chinese merchants.

It has a great history, and is filled all day with worshipers and the curious (such as us) who made it through the portals into this dimly lit and heavily scented shrine filled with the smoke of many Joss sticks of incense burning, and the sounds of drums and clanging of cymbals as people prayed.

The entryway from the courtyard into the temple is marked by an enormous free-standing red, black and gold lacquer door, behind which hang dozens of earth colored spirals suspended from the ceiling that are burning incense coils.

Up a few stairs from the well of coils is the altar where the faithful place their burning joss sticks in pots of sand, occasionally banging a drum or clanging a cymbal to emphasize the prayers.

As you leave, you see the Lit Shing Kung, or “saints’ palace” with images of other Taoist and Buddhist deities or personages. 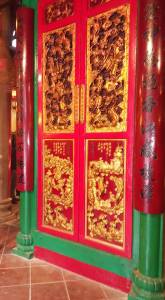 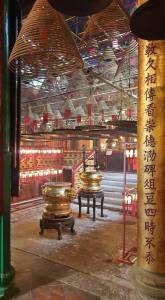 There were many more adventures in these three days, including excursions through Causeway Bay and the shopping malls, meals in back alleys (some great food most of the time), a return to that alley in Kowloon for Korean barbecue, touring Central, and finally a trip out to Lantau Island (where the new airport is located) and a visit to the amazing Ngong Ping Plateau, site of the Tian Tan Buddha, the largest sitting Buddha in the world, a 202-ton, 23 meter high statute of Buddha sitting atop a large bronze lotus flower.

The trip up to this plateau is usually done by gondola cars, but the wait was over 2 hours and so we opted for the less-scenic bus ride up the treacherous mountain roads (waiting only 1.5 hours for the bus!).

Arriving in the late afternoon at the peak, we walked onto the grounds of the Po Lin Monastery and made our way (with hundreds of pilgrims) to the foot of the status, looking up the vast 268 steps up that stared at me. My mind was saying “Yes, you can do this!” But my legs were saying, “No way!” But here it was mind and will over body and up I went… and once you go up (on the right side) there is no way to go down unless you make it to the top.

The view from the top (at the base of the lotus flower) is spectacular from all side, especially looking down to the monastery in the distance.

The climb back was not too bad, but it is true what they say about climbing down stairs… it was just as hard, if not harder on knees and feet.

At the base we had a chance to witness a group of Buddhist pilgrims joining the monks in afternoon prayers and a sacrifice, a huge bonfire consuming piles and piles of joss sticks bought as sacrificial offerings.

At the end of this long 3-days of walking, climbing, waiting, crossing, traveling by ferry, tram, bus, car, Metro and feet… it was nice to finally unwind with a cold glass of beer and toast the last days of 2015, and all that had occurred in that memorable year. 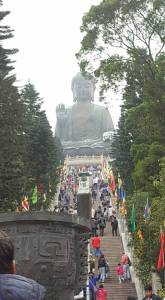 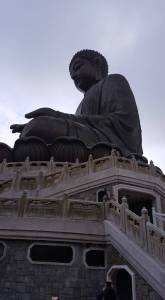 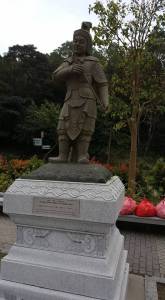 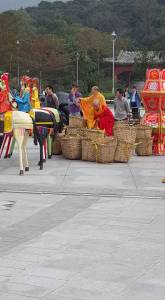 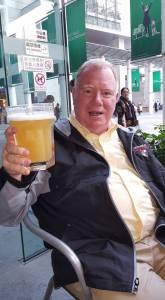