Has it only been about 36 hours ago when we began the descent over southern China and approached the island of Hong Kong? The 15 hours of flight time went by faster than I could hope, although my aching back and legs reminded me of the cramped position I had been in since the previous late night take-off from Newark Airport (EWK). I was grateful that I could sleep for most of the journey.

The pre-dawn landing meant that the lines at immigration services were short, and the baggage wait was also good. I found a cart after passing through immigration and it was sturdy enough to take on my 3 rather large (and overweight) bags.

I emerged from customs and was happy to see a Maryknoll confrere, Fr. John McAuley, standing their waiting with a very large and frothy Starbucks cappuccino in hand (Ok it was for him to help him wake up after getting to the airport to meet me, but it still was a nice gesture.) After navigating to a taxi stand we loaded up the suitcases (which did NOT fit into the trunk, but that was resolved with some stretch robes to keep the trunk lid down), and off we sped into the early morning — with temperatures in the 80’s with humidity, a change from NY Fall weather.

After maneuvering my oversize suitcases to a guest room on the 2nd floor (using a convenient chair lift for the elderly…), I began opening my suitcases, and getting settled. I had finally arrived at this island known in Chinese as the “Fragrant Harbour.”

Pulling up to the front of our Maryknoll House here in Stanley, I thought back of so many of the great heroes, the pioneers of the Catholic Foreign Mission Society of America who set out from Sunset Hill (the name given to the “knoll” on which Maryknoll was built after its foundation on June 29, 1911). I thought of that first band of men who set out for China in September of 1918.

Led by our co-founder, Father Thomas Frederick Price of North Carolina, and sent off and blessed by our other co-Founder, Father James Anthony Walsh, these young men wearing the first “mission crosses” became the standard by which so many of us were to be measured. Francis X. Ford (Brooklyn, NY) was martyred in China; Bernard Meyer (Brooklyn [sic], Iowa) died at Maryknoll in 1975 and was well-known and deeply respected by all of us in the seminary; and James Edward Walsh, from Cumberland, MD, who in 1927 became the first Maryknoller consecrated a bishop, and after the death of our founders, he was the 2nd Superior General of the Society (1936-1946), returning to his beloved China in late 1948 and taking up a new mission at the Catholic Central Bureau in Shanghai,

After the rise of Communism and their overtaking the government in China in 1949 they began harassing Catholic clergymen. The Catholic Central Bureau was forcibly closed in 1951. Fearful of the bishop’s safety, the new superiors of Maryknoll sought to bring him out of China, to which he bravely replied, “To put up with a little inconvenience at my age is nothing. Besides, I am sick and tired of being pushed around on account of my religion.” Bishop Walsh was arrested in 1958 and sentenced to twenty years in prison. He spent twelve years of his prison sentence in isolation and but was was unexpectedly released in 1970. He was deported via a footbridge to freedom in Hong Kong on 10 July 1970 and became the last Western missionary to leave China after the Red “Liberation” in 1949. Bishop James E. Walsh returned to the United States. On his 50th anniversary of episcopal ordination (May 21st 1977 — admittedly one day early)  I was privileged to be ordained to the priesthood by this saintly man, who died on July 29, 1981. This photo was taken at my ordination as Bishop Walsh anointed my hands. 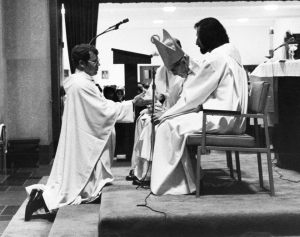 And now, over 38 years after that ceremony in our chapel at Maryknoll, here I am in Hong Kong where Bishop Walsh first began his missionary work in 1918 — His patience under duress is what helped me so often when facing so many hurdles and difficulties in my missionary work in Khabarovsk, Russia. Now it is a humbling experience to follow even more closely in his own missionary journey, his mission path here in China.

And now the real journey begins, setting out tomorrow from this Maryknoll House in Stanley:

and move to my new residence and ministry at St. Margaret Mary Church, Happy Valley. 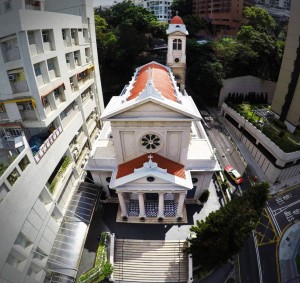